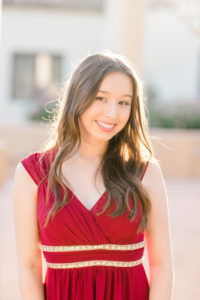 We are pleased to announce that Conservatory vocalist, Issana Yaguda, placed Second among a field of 30 competitors in the Schmidt Vocal Competition, held virtually, October 31st at Palm Beach Atlantic University. Issana, a senior at Seminole High School, has been actively applying and preparing to audition at several schools of music in the country. This competition proved to be very helpful in that preparation as well as profitable. Her second place win included a trophy and cash prize of $2,000.00. Among some of the comments she received were the following: “You have a very beautiful voice and you sing expressively and musically.” “Go for it! You have lots of potential and did a beautiful job.” “Wonderful timbre and color in your voice. Congrats. You have nice artistry and phrasing.”

Issana has been a student at the SACM for 10 years, studying violin with Olga Kolpakova and now voice, for the past 18 months with Laura Yount. Congratulations, Issana!

What’s Happening at the Conservatory